[Prologue] Chapter 13: Some Are Born To Sing the Blues 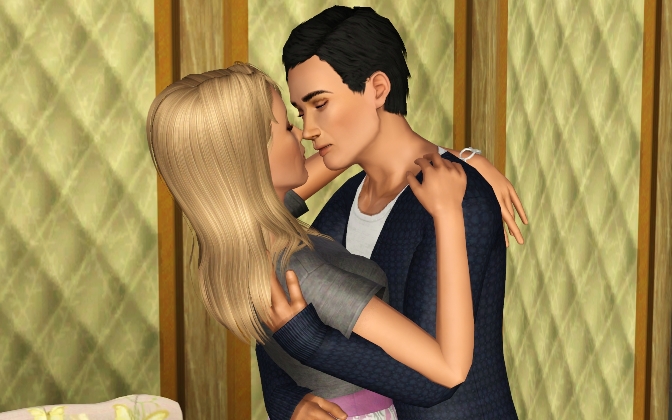 “Maeve,” he murmurs her name softly, letting the delicate sound linger on his tongue. “I’ve missed you.”

Maeve smiles and kisses him again. “You don’t know how long I’ve dreamed about this moment,” she whispers breathlessly. “But I need to tell you something, Luca.”

“Can’t it wait?” he asks as he runs his hands down her back and begins fumbling with her clothes.

She pulls away slightly and shakes her head. “No. I need to tell you something,” she repeats, more firmly this time. “Wait here.”

Grabbing her hand, Luca looks her straight in the eye and says, “Come back, okay?”

Maeve tries to laugh off his words, but Luca’s face remains hard and serious. “I’ll only be a second,” she assures him.

What she brings with her when she returns sends shockwaves down Luca’s body.

“This is Tallulah,” Maeve tells him quietly. “She is your daughter, Luc.”

A million emotions rip through his chest as Luca’s eyes come to rest on the child in her arms, but anger quickly overwhelms him.

Maeve’s face falls. “Luca,” she pleads. “It’s not like that! I didn’t know I was pregnant when I left, and before I could tell you they discovered me. The council, they found me, and I had to cut off contact, to protect you and Delilah.”

Luca takes a step back. “I’m so tired of your bullshit,” he whispers, shaking his head in disbelief. “You show up here after years of being gone, and then you drop something like this on me?! I can’t- I can’t do this anymore. I want to love you, but you’ve done nothing but hurt me and my family. No more, Maeve. No more.”

Tears begin to stream down her face as Maeve reaches out to him. “Please,” she cries. “I wanted to tell you, but I was scared! I couldn’t face you again so soon after leaving, and I needed some time away to think about things. I’m sorry.”

“No,” he breathes as he reaches for the door. “We’re done, Maeve. I’ll take the kid if that’s what you want, but I never want to see you again.”

“But I’m going to stay in Jericho!” Maeve sobs, desperation seeping into her voice. “To raise Tallulah near you and her sister. I want to be a family again, Luc. I want-”

But he’s already out the door.

After walking around town for hours, Luca comes home late that night to a warm welcome from Emily.

“I was so worried!” she cries, throwing her arms around his neck and kissing him deeply. “Where have you been all day?!”

Luca closes his eyes and braces for the worst. “I saw Maeve today,” he whispers. “I- We have another daughter, Emily.”

To his complete and utter surprise, Emily doesn’t freak out or lose her temper.

Hearing those words, full of love and support, Luca feels the walls of anger and frustration that have enclosed his weary heart for so many years collapse around him, and he begins to sob, choking on the tears he’s held back since before Maeve left.

“I love you,” she soothes as he cries on her shoulder. “I love you.”

Hoping to distract Luca from his worries about Maeve and their daughter, Emily arranges a day at the park that weekend with him and the kids. The ponds have already frozen solid for winter, and so the family decides to try their hand at ice skating.

Ever eager to show off his athletic prowess, Rigby is the first to try skating all the way around the pond.

Although he struggles a bit at first, he does eventually get the hang of it.

Not to be outdone by Rigby, Kieran also attempts to make it around the whole lake, but he’s much slower to pick up the skill than his nimble friend.

Delilah doesn’t like ice skating. It’s much harder than it looks.

Emily, however, finds the exercise stimulating and enjoyable, and she loves the challenge of trying to keep her balance, even if she isn’t that graceful yet.

Oona is a natural and doesn’t even fall once. Well, that is until she and Rigby decide to try spinning together…

Nevertheless, they get right back up and try it again.

After skating, the family starts a fire and roasts some marshmallows. Despite repeated warnings of burnt and blackened sugar, Delilah insists on doing three at a time…

And naturally she burns them all.

Kieran gives her one of his extras, and the rest of the day proceeds without incident.

Meanwhile, Emily’s nausea continues to worsen to the point that even Luca begins to worry about her.

One night over dinner, he ventures a theory.

Emily freezes, carefully considering the idea. “I- I’m not sure,” she admits quietly. “Will you go with me? To find out?”

Luca nods and squeezes her hand reassuringly. He doesn’t want more kids, but pregnancy would be far better than some life-threatening ailment.

The night after the doctor’s appointment, they’re both in shock.

“I’m sorry,” Emily whispers, barely able to make eye contact. “I should have been more careful.”

“Stop it, Em. It takes two to make a baby.” He smiles and runs his fingers down her wet, tearstained cheek. “I love you, and I feel blessed that I’m going to be a parent again. Especially with you.”

Emily looks up at him skeptically. “You mean it?” she asks.

Luca nods. “I know it wasn’t planned, but we can handle this.”

“But what about the kids?”

“They need to know about us,” he replies with a sigh. “We should have told them from the start, but they’re good kids. They’ll understand.”

Pulling her into his arms, Luca kisses her fiercely.

“You’re the best thing that’s ever happened to me,” he tells her when they break apart. “And I love you.”

“I love you too,” she whispers contentedly.

For the most part, the kids take the news in stride. Rigby even suggests that the pair ought to get engaged soon.

Delilah, on the other hand, has the opposite reaction.

"How long do you wanna bet they stay together?" she frowns. "Six months? A year?"

“You’re no fun!” Delilah pouts. “Besides, relationships never last, and this one won’t either.”

Kieran just shrugs and turns back to his cereal.

At Emily’s urging, Luca invites Maeve over to the house the following afternoon. He needs to tell her about Emily, and he wants to get acquainted with his other daughter.

He plays with Tallulah for a little while before sitting down to talk with Maeve.

“I’ve moved back into my mother’s old house,” Maeve tells him as he joins her on the couch. “Atticus had to return to his garden near Arundel, but I plan to stick around this time, Luca. I want Tallulah to know her father.”

Luca sighs. “I want to know her as well, but that doesn’t change things between us, Maeve. I- I’m with somebody else now, and we’re expecting a baby soon.”

Maeve inhales sharply, her eyes wide with surprise. “Who?”

One word, a single question, but Luca can’t help but feel offended.

“Does it matter?” he snaps. “I love her, and she loves me. I will be a father to Lulu, but I don’t want anything to do you with you, Maeve.”

Maeve frowns, feeling both frustrated and hurt by his angry declaration. “Fine,” she whispers at last. “But if you want to see Lulu, then I get to be a part of Delilah’s life as well.”

Luca shakes his head. “No,” he says simply. “She has a mother, and you are not her. If she wants to meet you again when she’s older, I won’t stand in her way, but until she’s a teenager and fully capable of understanding her decisions then I don’t want you to have any contact with her. You hurt her badly the first time you left, and I can’t risk that happening again.”

Maeve tries to argue with him, but Luca remains firm in his decision. Seeing no alternative, she finally relents and agrees not to contact Delilah until after her birthday.

One day after school, Kieran and Delilah decide to check out the arcade games at the Old Station Venue near their house.

They both love music, however, and are immediately drawn to the karaoke machine.

Back at home, Emily’s baby bump continues to expand at a rapid rate. Despite his initial concerns, Luca actually feels excited at the prospect of another child, and he honestly can’t wait to meet the little stinker. Sure, the 3 a.m. feedings are a pain and he could live without all the dirty diapers, but he loves Emily and is looking forward to raising their baby together.

“How did it get in there?” Delilah asks one morning.

Emily smiles as Lila gently presses her head against her belly. “When a man and a woman love each other very much, they will have sex together,” she explains carefully, “and sometimes, very rarely, a baby is created.”

Delilah’s eyes widen. “But how does it get out?” she breathes.

“With a lot of pushing,” Emily laughs.

A whole heck of a lot of pushing in Emily’s case.

After hours and hours in the delivery room, Luca and Emily bring home a baby girl, who they name Zosia.

A short while later, Kieran quietly ages up into a teenager.

And life at the McKinley household finally settles into a happy routine.

Zosia is pronounced like “Sasha” except with a Z at the beginning instead of an S. It’s the Polish variation of the name Sophia, which is Greek and means “wisdom”. Zosia was born with the computer whiz and bookworm traits, so I thought it suited her quite nicely.

The whole situation with Maeve got rather… sticky there for a while. When Maeve originally left my family, she was, unbeknownst to me, pregnant through a risky woohoo. When I found out, I decided to let her have the baby, thinking that I’d move it into my family and have Luca raise it, but then I decided that I *really* wanted to see a Luca/Emily kid. So this is the story line I came up with to accommodate all the changes in my plot.

However, I’m PUMPED to get on to my next generation! Kieran turned out really, really cute as a teenager, even better than I could have hoped, and Delilah and Rigby become teenagers next chapter as well. In case this wasn’t obvious, Delilah is going to be my generation 2 heir. =D

(Also, sorry for the shameless Glee insert. I was only really a Gleek for a couple of seasons, but I just love their version of that song!)
Posted by Buckley at 8:33 PM

New to the McKinley Clan?

Start from the beginning with the prologue, or dive straight in to the heart of the story with generation one.

An ongoing discussion about the challenge and general Sims 3 related ramblings can be found at this thread on Mod The Sims.